Former Shea Raider Matt Bryson was faced with a number challenges throughout his life, preventing him from ever discovering how far his talent could take him. Now, at age 30, Matt is counting his blessing’s and taking one last shot at playing the sport he loves.

“You know, there are kids out there that gave up on their dreams too soon when, in reality, it’s never really too late.”

“I just feel like I can inspire someone with my story and my background.” Bryson said, “There are a lot of kids who have a lot of the same stories, they could have pursued sports as well, but they gave up on their dreams. I’m 30 years old, still trying to chase the dream. I might be a little too late, but my story could give these kids a little more [motivation], like okay, if he can go for it at 30, why couldn’t I do it at 24?”

For some people though, facing overwhelming odds are just another part of life. Matt has been running against the wind for most of his life, so obstacles are nothing new.

Matt was raised by many different people, but the primary person in his childhood was his mother, Dawn Bryson, who unfortunately developed a drug addiction as Matt began developing as an athlete.

“Before high school, I would say my life was great” Bryson said, “That all changed my freshman year of high school.”

Matt would look forward to the first of the month throughout his younger years, because that meant food stamps were coming in, so the fridge would fill up. As he got older, the fridge stopped filling up. That’s what made him begin to realize that his mom was developing an addiction to drugs.

“Going home and having no food in the fridge. Having nothing to eat. That kind of pushed me,” Bryson said.

These troubles at home led to Matt moving out of home as a Freshman in high school and living with different friends, sleeping on couches and floors. He grew a sort of aggression towards the world, often getting into fights outside and not always putting himself in the best of situations.

He also had a father figure in his life, Mike Ross, who began suffering from a drug addiction while Matt was still in high school. When Matt was 11, he also discovered that Ross wasn’t his biological father, but that didn’t stop him from continuing to view him as his father.

On top of everything, school wasn’t much of an escape for him. Matt was diagnosed with dyslexia and struggled mightily throughout school. His one escape was football.

Although Matt left home, he would try to keep in touch with his mom when he could.

“I used to ask my mom to go to my football games,” Bryson said, “I remember her exact words were always, ‘Ah, I could just get the newspaper, I can see what you did in the newspaper.’ She didn’t know how good I really was, you know?”

And boy was Matt good.

During Bryson’s freshman year of high school, he played on the Darlington Braves, Pop Warner football team. He helped lead the team to win the state of Rhode Island’s first ever Pop Warner National Championship.

In high school football, Bryson amassed 320 carries, 3,750 rushing yards, 11.72 yards per carry, over 10,000 all-purpose yards, and 72 total touchdowns in 3 seasons. He was the leader of a Shea team that was nationally ranked in Sports Illustrated, which was extremely rare for a Rhode Island school, not to mention a public school.

Bryson was named a First Team All-State performer after his junior and senior seasons, while also leading the Shea Raiders to a state championship as a senior.

Rhode Island, being such a small state, receives very little attention from the major football programs, but in the 2000’s, there were some exceptions.

“The people that I kind of looked up to when I was in Pop Warner and through high school were Will Blackmon and Jamie Silva and those guys, because I always wanted to go to Boston College but my grades just weren’t there,” Bryson said, “Once I saw Will Blackmon get drafted, I was going into my senior year, and I thought to myself ‘that could possibly be me too’—he was from Rhode Island so I could possibly do the same thing.”

On June 28th, 2007, Matt was celebrating his 19th birthday with his last game of his high school career, the Rhode Island versus Connecticut annual Senior All-Star Game. Following the game, Matt received news that his SAT scores were too low, so he wouldn’t be eligible to play college football in the fall.

Academics were always a major weakness for Bryson. His disability placed him in special education courses throughout high school. Bryson’s combined troubles at school and at home, resulted in him having to start college at a school with no football team, the Community College of Rhode Island (CCRI).

Still, despite Matt’s academic struggles, graduating from high school was quite an accomplishment. Beginning college was also suppose to provide Matt with an opportunity to start fresh. But halfway through that summer, one of Matt’s close family members was shot and killed by the police.

Matt’s goal was to one day play professional football, but when your current reality keeps throwing obstacles in your path, it can become incredibly difficult to stay focused on distant dreams.

Bryson went to CCRI, but was in a bad place mentally, he lost nearly 20 pounds, and was thinking he’d never play football again. Fortunately though, an opportunity came for him to transfer to Dean College, another junior college, but with a football team.

Matt wanted to play running back, but was instead put on special teams and positioned as a slot receiver. The transition was frustrating, but he now sees how the change added a lot of versatility to his game. Bryson ran the ball a total of just 13 times at Dean, but he still managed to average over 12 yards per carry with his limited opportunities.

As his time at Dean came to an end, his GPA was below a 2.5, so he ended up going to a struggling Division III school in 2010, Nichols College in Dudley, Massachusetts. 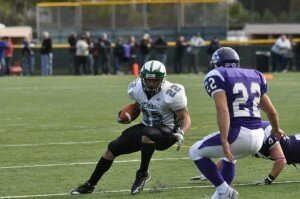 In his lone season playing at Nichols, Matt slowly picked up a role with the team and by the end of the season, was the top running back on the roster. Matt helped break the team’s 10-game losing streak when he rushed for over 120 yards to lead the team to its only victory that season.

Despite only getting five starts that season, he was named to the All-Area Team for his exemplary efforts. However, grades once again got in the way of Matt’s future, and he was declared ineligible for his senior year.

In 2011, Bryson was out of school, out of a home and seemingly out of options. That’s when something great and completely unexpected happened

Matt was out one night and met his girlfriend, Ana Gibau. It’s hard to undersell how greatly Ana would impact Matt’s life. Ana became a person that was willing to ride the waves of life with Matt.

“She pushed me. I never had a job before I met her or my driver’s license,” Bryson said. “She had me applying for jobs that I thought I could never get, gave me confidence, made me feel loved for the first time in a long time. She was there when I got kicked out of college. She held me down. When I was at my lowest in life, she was the only one there for me.”

Matt still had his passion for football, but building a life for himself started to take priority.

“I wanted to still play football, but you have to provide for yourself,” Bryson said, “At that time, I couldn’t really chase a dream. I had to survive.”

Now at this point, I’m sure you’re wondering: How does this story lead to a football comeback?

On February 3rd, 2018, Matt and Ana had a baby girl. The announcement of the pregnancy brought a bright light into Matt’s life. He completed his schooling and received his college degree this past winter. Bryson’s mom has also been sober for over a year, wanting to be a part of her granddaughter’s life. His father has also been sober for three years.

And finally, having a child, reignited the old football flame in Bryson’s heart. Through everything, Matt never lost his love for the game.

“I just had a daughter, and I want her to believe that she can be anyone she wants to be,” Bryson said. “So what will I look like telling my daughter she can do anything– anythings possible– and I never really tried to chase my dream? What kind of role model would I be?”

Matt has also been sharing some of his old high school and college highlights recently on social media and the response has been very positive. This also helped nudge him back into considering a run at playing professionally.

“I’ve been asked since I posted the videos by numerous semi-pro teams, six or seven of them throughout New England, about playing for them but I’m not trying to put my body through this for nothing,” Bryson said. “I can’t tell them that, but realistically, I don’t feel like coming to play and potentially getting hurt for free.”

Well I’ve been going to the field for two hours doing field work–ladder, parachutes, hills, sprints, a lot of running, stuff like that and I also go to the gym. Then I do yoga three times a week. I’m doing a seminar before and after stretching. So, I’m at the gym two hours and at the field for two hours. I stretch for another 30-40 minutes in between that. So, from 5 o’clock at night to 10 o’clock at night, I’ve been putting the work in that you’re supposed to put in. I know at the level that these guys are at now, in order for me to get there, I have to take care of my body as well. Where before I never took care of my body through high school, college–never did yoga, never stretched like that–just went out there and played and that was it. I feel like I’m in probably the best cardiovascular shape I’ve ever been in, even through high school and college now.

Bryson currently has tryouts set-up with multiple professional leagues in the coming months and is hoping to get a contract for an upcoming season.

“This is a chapter that needs to be closed. Whether it works, or it doesn’t, I don’t want to live in regret, always saying, ‘What if?’”

Some athletes look at these closing moments as losing hope, but Matt Bryson’s life shows that no matter how many times the world tries to close a door on you, or knock you down or some other cliché, you can always open that door again– and sometimes, even find a better one.