Andre Drummond of the Detroit Pistons has all the tools to be a force in the NBA for the next 10 years.

Drummond has been right in front of us all along, and he is hard to miss. Standing at 6’11”, 279 lbs., he is averaging 20 points, 19 rebounds, 1.8 steals and 1.8 blocks per game in this young NBA season. Drummond is shooting 57 percent at the free throw line, which is a 17 percent improvement from last year. His game is blossoming, but his path to stardom started long before this NBA season.

In 2012, Anthony Davis was at the top of the draft class, but Drummond was also a projected top five pick heading in. The UConn freshman had an NBA ready body and, at his size, unparalleled athleticism. Yet some were questioning his intangible skill set; things like work ethic and maturity. However, no one could question his talent, and it was thought that there was no way he would fall out of the top five, but he did.

Charlotte, Washington, Cleveland, Sacramento, Portland, Golden State and Toronto all passed up on Drummond. He knew the Pistons loved himIn an article on Grantland.com, Jonathan Abrams quoted former Pistons President Joe Dumars having said, “I just felt like if he’s there at nine, there’s no way we’re going to pass on this kid.” 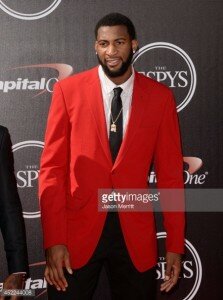 For anyone wondering what took so long for Drummond to have a breakout campaign, look no further than the flying circus that is the Detroit Pistons franchise. He was drafted by a team that already had Greg Monroe, so there was a clogged frontcourt for both of them. The Pistons often played Monroe at center, and they took their time developing Drummond in his first year.

Despite limited playing time at 20.7 minutes per game in his rookie year, Drummond averaged 7.9 points, 7.6 rebounds, 1.0 steal and 1.6 blocks as a rookie, while shooting 61 percent from the floor. Over the last two years with Josh Smith and Monroe clogging up the lanes, Drummond still average 13.7 points, 13.3 rebounds, 1.1 steals, 1.7 blocks while shooting 56 percent. Not impressed? He grabbed 5.4 offensive rebounds per game.

In the NBA rising stars game in 2014, where all the young players compete in their own version of an all-star type of game, Drummond beat out Anthony Davis and Damian Lillard to win the rising stars MVP, scoring 30 points and a record 25 rebounds. With such a decline in traditional basketball, there aren’t too many true centers that can truly impact a game like Drummond.

It was clear what direction Drummond’s game was heading when the Pistons hired Stan Van Gundy in 2014. Van Gundy has previously coached Shaquille O’Neal and Dwight Howard. He’s the perfect coach to teach Drummond, and to run a system where Drummond dominates the middle with shooters all around him. What happens next? Josh Smith gets cut, Monroe walks away in free agency and the Pistons acquire Marcus Morris and Ersan Ilyasova, two shooting forwards, to go with a knock down shooter in Kentavious Caldwell-Pope and Reggie Jackson. The new roster has much better floor spacing, allowing Drummond to own the paint on both ends.

Drummond has an overpowering quality to his frame, even more so than Howard. Yet he runs like a deer down the court. Drummond is not clumsy like most big men; he has smooth strides and can explode off one or both feet. He’s one of the quickest centers in the league; he can jump through the roof. He can protect the rim even when opponents think they have a shot, like he did against Greg Smith.

What is the best part of Drummond’s game? He’s only 22 years old, and still not yet polished offensively. His skills are rapidly developing and he has a long successful career ahead of him. As the Pistons continue to find the right pieces and build around him, Drummond can play at this level for years to come.