LeBron James spent large parts of his early career trying to find his way around the Boston Celtics. The Boston Celtics have worked hard for years to find their way back over LeBron James. Now the Celtics and Cavaliers strike a blockbuster trade in attempts to grab control over the Eastern Conference.

That is how the saying went Tuesday night as the Boston Celtics finalized a trade for Cleveland Cavaliers star point guard, Kyrie Irving. In the deal, the Cavaliers received Isaiah Thomas, Jae Crowder, Ante Zizic and the Brooklyn Nets unprotected 2018 first-round pick from Boston.

My first takeaway from this was that the Celtics “assets” have finally been moved around to create a legitimate championship contending roster.

Maybe the most interesting thing about this deal however is not the pieces involved in the trade, but whose team the best player the Celtics have gained is coming from: LeBron James.

The NBA has come full circle.

On July 8th, 2010, over 13 million people crowded around their televisions to listen to the most polarizing athlete in the world say, “In this fall I’m going to take my talents to South Beach and join the Miami Heat.”

Since that moment seven seasons ago, no team without LeBron James has won the Eastern Conference and he has brought two championships to Miami and one to Cleveland.

For the last 10 seasons, there has been one Eastern Conference team that can be attributed to the direction LeBron’s career has gone: the Boston Celtics.

The following year, in 2010, James and the Cavaliers looked to be on their way to their second NBA Finals appearance. The Cavs were the No. 1 seed in the Eastern Conference, had the best record in the NBA, LeBron James was the League MVP and they beat the Chicago Bulls in a quick five-game series to start the playoffs. Then the No. 4 seed Boston Celtics showed up and upset the Cavaliers in a tough six-game series. This would mark the end of an era in Cleveland and, unknown at the time, the end of an era in Boston.

James not only helped build a team too good for the Celtics big three to overcome, he also helped break apart the Celtics squad, by luring Ray Allen over to the Heat in 2012. This proved to be a great decision for Miami considering Allen hit one of the biggest shots in NBA history against the Spurs to keep the Heat alive in the Finals.

Then something amazing happened in Boston… The Brooklyn Nets built what many thought was the next NBA super team with one trade: 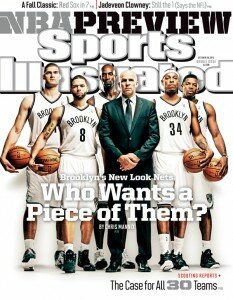 This trade gave the Nets what seemed like an incredible starting five at the time in Deron Williams, Paul Pierce, Joe Johnson, Kevin Garnett, and Brook Lopez. Unfortunately for Brooklyn, Williams Pierce and Garnett were all on a fast-track decline and Brook Lopez would get hurt.

Meanwhile the Boston Celtics tapped out to LeBron’s reign over the Eastern conference and kicked into rebuild mode. It paid off greatly.

The Nets trade resulted in the Celtics drafting No. 3 overall in the last two NBA Drafts with those unprotected first-round picks, selecting small forwards Jaylen Brown and Jayson Tatum. This resulted in the expendability of Jae Crowder.

Then the Boston Celtics traded Marcus Thornton and a draft pick that resulted in Skal Labissiere to the Pheonix Suns for the short flashy guard with the familiar sounding name, Isaiah Thomas.

During his two full seasons with the Celtics, Thomas made the All-Star team both years, and finished last season scoring a career-high 28.9 points per game, third most in the NBA. He also accomplished his high-volume scoring on a career-high field goal percentage of 46.3 percent.

Isaiah Thomas, although great, is in the final year of his contract and has been vocal about wanting to be paid accordingly. On top of this, Thomas was holding up the Celtics pass centric  offense against LeBron James and the Cleveland Cavaliers. When Thomas was out with his injury, the Celtics played better and even took a game against the Cavaliers. These issues combined with his skyrocketing value, made IT expendable.

The Boston Celtics finished the 2016-2017 season as the No. 1 seed in the Eastern Conference but were stopped again by the dominance of LeBron James and the Cavs.

This offseason however has brought on the biggest changes with the Boston Celtics roster since the big three signings and the Celtics tension with LeBron is about to hit its peak.

Kyrie Irving, who has been widely regarded as the second-best player on the Cavaliers over the last three seasons, expressed his displeasure with his role in Cleveland and that he wanted out. The door then opened for the ultimate shakeup by the Boston Celtics.

This season marks ten years since the Celtics formed their big three that ultimately resulted in LeBron throwing his jersey off and bolting for a team that had the pieces to compete for a title.

The final remnant of the Celtics big three in Boston was the 2018 Brooklyn Nets unprotected pick. This pick was the final deal maker that would ultimately convince the Cavaliers to let Kyrie Irving go to a team that they will likely have to face in the Eastern Conference Finals.

To add a little more fuel to the flames, the NBA 2017-2018 season begins with a matchup between the Boston Celtics and Cleveland Cavaliers on October 17th.

We still have a long way to go before anyone can say which team won this blockbuster trade.

For now, two things are known: