Prediction from Brian Byrnes on how the 2015-16 NBA season is going to unfold and who will be holding up the Larry O’Brien trophy at season’s end.

The 2015-16 NBA season is kicking off with a wave of big questions. How long can LeBron James carry an undermanned Cavaliers roster? Can the Clippers finally get to the conference finals? Will the Warriors repeat? What about the Spurs? We’ll have to tune in and watch to find out all the answers, but here are my predictions for the 2015-16 NBA playoffs, starting with the eastern conference.

The Hawks and Wizards are the stereotypical  solid regular season teams. Coach Budenholzer’s flow offense will allow Atlanta to run roughshod over the eastern conference, and the Wizards are looking to make another leap despite losing their postseason hero, Paul Pierce. John Wall wants to be in the MVP conversation, and looks to come out swinging with Bradley Beal and company. However, these teams do not have enough fire power to really contend with Cleveland or even Chicago.

The Bulls are a team to get hung up on and no one knows what to make of them. Yes, they beat Cleveland in the season opener on Tuesday, but will that team show up every night? It’s a tall order for an aging and often depleted roster. Combine that with a new coach and declining team defense, and I don’t think they are consistent enough to contend for a championship right now.

If you’re looking for potential challenger in the East, you can’t look past Dwyane Wade, Chris Bosh and the revamped Miami Heat. I think they are a second round or conference final team depending on what matchup they get. They could gel at the right time and upset the Cavaliers, depending on the health of Wade and Bosh, and upside of high ceiling players like Justice Winslow and Hassan Whiteside.

As overwhelming favorites, the Cavaliers greatest threat to making another NBA Finals appearance is their health. Not only do Kyrie Irving and Kevin Love have a history of injuries, but LeBron James will has serious wear and tear going into his 13th season. James will be 31 in December, and has played nearly six and a half seasons since 2011. He has played in the Finals the last five years, which is roughly 20 games extra each year. That combined with his Olympic appearances and next year’s Olympics is a lot for any player. James is in great shape, but he’s also going into his 30s, and you have to wonder how much more his body can take. 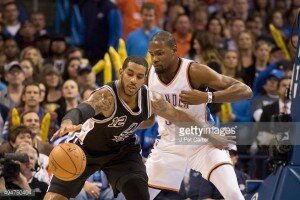 Maybe there is an upset from the Grizzlies or the Rockets in the first round, but it is unlikely with the talent on the rosters of the top four seeds. The Grizzlies still don’t have enough dependable perimeter shooting. And the Rockets can only go as far as James Harden takes them. The Pelicans and Jazz are on the rise, but not there yet.

Yes, the Clippers pried DeAndre Jordan back from the Mavericks and added Paul Pierce and Lance Stephenson, the Spurs are completely stacked with new and old faces, and the Warriors just returned their championship core, but hear the case for Oklahoma City.

The Thunder won 45 games last year, 27 of them without Kevin Durant. It was a year where Russell Westbrook terrified point guards everywhere on his way to the MVP conversation. So now they have the 2014 MVP returning to play with one of last year’s MVP candidates. Throw in perennial shot-block leader Serge Ibaka and OKC can contend with anyone in the West.

The Thunder can matchup with big lineups by using Enes Kanter at center and play small ball with Ibaka at center and Durant at power forward. Durant will easily score 30 a game on anyone. Only the likes of Andre Iguodala or Kawhi Leonard could give him problems. However, it’s the matchup of Russell Westbrook that is crucial to the Thunder’s success. No point guard wants to run into Westbrook in the playoffs.

Westbrook’s ferocity, and his frame at 6’3” 200 lbs., is a nightmare for the other championship teams. Westbrook is completely capable of bullying Steph Curry, Chris Paul and Tony Parker in the playoffs. He can make them use all their energy on defense, and come at them relentlessly on the other end. By exhausting the floor generals of the other contenders, Westbrook can cut off the heads of the opponent’s offense and that is his greatest strength for helping the Thunder get to the finals.

In conclusion, I like the Thunder to beat the Cavaliers in seven games. Kevin Durant can go toe-to-toe with anyone, and I bet he wants another crack at LeBron James. Russell Westbrook will be chomping at the bit to face Kyrie Irving, and Ibaka, Kanter and Steven Adams can handle a lot of the problems that Love and Mozgov have given to other teams in the past.

Durant seems more motivated to win than ever before. Everyone thought the Thunder would have been back to the Finals by now, and it’s crazy to think that this could be their final chance to win it all with Durant’s looming free agency in 2016. That alone should serve as extra fuel for the Thunder, who have high expectations and want to put the rest of the NBA on notice. They are healthy, experienced and ready to go.