The 2017 NFL Draft is right around the corner. Jeremy Dawson and Jonathan Dawson of After Overtime went turn by turn in this mock draft that features the best players that the 2017 class has to offer and certainly a few surprises. 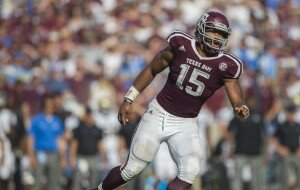 Jonathan: Garrett has been heralded as the number one pick for months now, but with an almost super human combine performance and physical qualities that scream all pro talent, he looks like a sure lock to be the first player called to the podium this year. Garrett should make an immediate impact for a team in dire need of one.

Jeremy: The San Francisco 49ers are still looking for an identity on both sides of the ball and if they love a QB in this class they could pull the trigger on one here. I don’t see a QB worthy of the No. 2 pick this year however and Solomon Thomas fits a need and has the potential and personality to become the leader of an NFL defense.

Jonathan: Marshon Lattimore is an unbelievable athlete with a short highlight reel due to hamstring injuries. His explosiveness, combined with elite size at the position makes him a solid playmaker on the defensive side of the ball that Chicago is seriously in need of to stop the pass for years to come.

Jeremy: The Jaguars have a talented young defense, explosive offensive weapons, and a young quarterback who is still trying to figure things out. Adding a generational prospect at halfback like Leonard Fournette would supply relief for Blake Bortles and add a new dimension to the offense.

Jonathan: Hooker is the type of player who lurks back in the secondary, not necessarily breaking immediately on balls, but breaking INSTANTLY on wherever the football ends up. Tennessee could use a playmaker of hookers type to make life of the offense a bit easier.

Jeremy: With Jamal Adams paired with Calvin Pryor, the New York Jets can have one of the most feared safety tandems in the NFL. Adams is an outstanding athlete and can become a leader in the Jets locker room very quickly.

Jonathan: With Gus Bradley taking his 4-3 defense to the West Coast, this makes the slipping of Allen to number 7 a no brainer where he can accel at DE or DT with his terrific acceleration and hand moves off the line.

Jeremy: There are three wide receivers in the 2017 NFL draft class that could all hear one of their names called in the top 10. With two big targets already at Cam Newton’s disposal and the losess of Philly Brown and Ted Ginn in free agency, I think the Panthers will look to give Newton a speed target. John Ross will likely enter the NFL as the fastest player in the league.

Jonathan: Cam Robinson, a two-time All-SEC selection, has great size, athleticism and strength, giving him the ability to come in and immediately make an impact on a Cincinnati offensive line that needs rebuilding.

Jeremy: Losing Stephon Gilmore is not going to be easy on the Bills. Gareon Conley can certainly ease the pain of that hit though. Conley is a versatile corner who can run a combination of coverages all around the field. 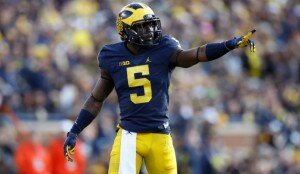 Jonathan: With the Saints desperately needing a spark on defense, they get an absolute stud with Peppers. He is a hybrid player with his ability to blitz, cover, tackle and provides added value with his electric return ability.

Jeremy: The Cleveland Browns have been throwing blindfolded at a quarterback dart board for years. DeShaun Watson is another shot in the dark. At the very least, the Browns will know that they are getting a player who is of high character and who performs his best against the best competition and in the biggest moments.

Jonathan: Foster is ferocious hitter and with his ability to cover, he makes for the type of linebacker who will set a tone right off the bat on a Cardinals team who needs that exact type of mentality on what has been a lackluster defense.

Jeremy: With Ryan Matthews constantly injured and Darren Sproles about to turn 34, the Philadelphia Eagles need to sure up the running back position to help take some of the pressure off Carson Wentz. Dalvin Cook has rare explosiveness that will make him a day one starter in the Philadelphia.

Jonathan: Ramczyk possesses the rare combination of athleticism and intelligence at the tackle position to come in and make a drastic impact as a rookie. His body of work in his collegiate career against top notch pass rushers shows that he can be an extremely valuable asset.

Jeremy: A value pick here for the Baltimore Ravens and an opportunity to fill a need. Derek Barnett had a tremendous college career and will fit in with the Ravens defense due to his hard-hitting ability and his knack for finding the opposing quarterback.

Jonathan: The Redskins need a ton of help at all phases of their defense but landing a pass rusher with the upside of Taco Charlton will be huge. Getting to the quarterback in a division that is loaded at the position will be a giant leap for a defense who has struggled in that department.

Jeremy: This pick may come as a bit of a reach for a cornerback who is lacking top recovery speed but you cannot teach this kids size. The Titans go with two defensive backs with both of their first round picks and their defense is starting to look on par with the offense.

Jonathan: Humphrey is a terrific cover corner who also has the ability of laying the wood. Humphrey is extremely athletic with a frame scouts drool over in a defensive back. Look for Humphrey to lock down the outside in Tampa for years to come.

Jeremy: It’s not likely that O.J. Howard lasts 20 picks in this draft but if it does happen it would be an absolute steal for an offense that hopes to get back on track following a very disappointing 2016 season. Howard has the potential to come in and be a top tight end in the league very early in his career.

Jonathan: The Lions took care of some offensive issues in free agency so adding a guy who can not only accel at the linebacker position but can flip to defensive end as a productive pass rusher is a luxury Detroit could use on the defensive side of the ball.

Jeremy: If Forrest Lamp were longer I think he would have been the best offensive tackle in the 2017 NFL draft class. But instead he’s going to be moved inside and may still end up as the best offensive lineman drafted this year. The Miami Dolphins fill a huge void here.

Jonathan: Garett Bolles is a freakish athlete as shown with his combine performance. He possesses amazing footwork and acceleration, being able to engage blocks quickly as well as work his way to linebackers with his speed. The Giants will be getting a player who should make an immediate impact for a team that needs help in pass protection.

Jeremy: The Oakland Raiders have many needs across their defense but their strength comes in the front seven. Caleb Brantley will be able to slide into the lineup opposite Mario Edwards right away and be a productive starter for the Raiders.

Jonathan: The Houston Texans have a team that with even a speck of decent QB play could have beaten the Super Bowl champ new England patriots in the playoffs last season. Trubisky is the top QB on many people’s boards, so, if available here, he will be taking his talents to the lone star state.

Jeremy: The Seahawks have a few different team needs but even with no moves made, this team is a Super Bowl contender. The perks to being in that position is when a guy as talented as Mike Williams is available, you can take him regardless of where Wide Receiver ranks on your team needs.

Jonathan: Tre White has great footwork at the cornerback position and is battle tested coming out of the SEC conference. He is a terrific cover corner, known for his tight coverage and ability to stick with receivers in longer-than-usual coverage. White should make an impact right away.

Jeremy: Takkarist McKinley could see himself working up into an outside linebacker role down the line but for now he is best fit as a 4-3 defensive end. The Dallas Cowboys have not received significant pass rush from their defensive ends in a long time and McKinley could change that.

Jonathan: Although Green Bay needs some help at corner, this year’s draft is full of solid defensive backs, so that issue can be addressed later. McCaffrey is a dual threat out, being able to play out of the back field as well as at receiver in the slot with his natural fluid pass catching ability.

Jeremy: The Pittsburgh Steelers have a mix of decent tight ends signed onto the roster right now. Drafting David Njoku instantly shoots him to the front of that list and gives an already explosive offense another level of athleticism. 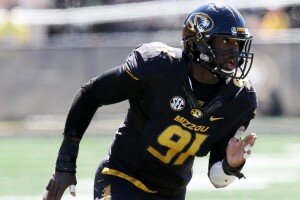 Jonathan: Atlanta added a nice piece to the defensive line with the signing of Dontari Poe and this pick could make the defensive line complete. Harris should come in and make an impact right away, opposite Vic Beasley, making Atlanta’s pass rush very dangerous.

Jeremy: At 5 feet 10 inches, Adoree Jackson might not have the ideal size for a team who has to spend six games per season against Kelvin Benjamin, Mike Evans, and Julio Jones but Jackson has great coverage skills and is a dangerous return man. Cornerback is the Saints biggest need and this will be a solid addition to a struggling group.